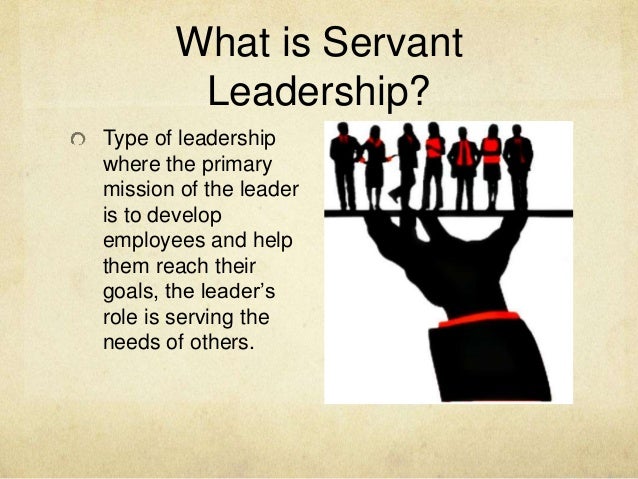 "The servant-leader is servant first... It begins with the natural feeling that one wants to serve, to serve first. Then conscious choice brings one to aspire to lead. That person is sharply different from one who is leader first, perhaps because of the need to assuage an unusual power drive or to acquire material possessions...The leader-first and the servant-first are two extreme types. Between them there are shadings and blends that are part of the infinite variety of human nature."

"The difference manifests itself in the care taken by the servant-first to make sure that other people's highest priority needs are being served. The best test, and difficult to administer, is: Do those served grow as persons? Do they, while being served, become healthier, wiser, freer, more autonomous, more likely themselves to become servants? And, what is the effect on the least privileged in society? Will they benefit or at least not be further deprived?"

Greenleaf said that "the servant-leader is servant first." By that he meant that that the desire to serve, the "servant's heart," is a fundamental characteristic of a servant-leader. It is not about being servile, it is about wanting to help others. It is about identifying and meeting the needs of colleagues, customers, and communities.

Robert Greenleaf's concept of the servant-leader was stimulated by his reading of Journey to the East by Herman Hesse. It is the story of a group of travelers who were served by Leo, who did their menial chores and lifted them with his spirit and song. All went well until Leo disappeared one day. The travelers fell into disarray and could go no farther. The journey was over. Years later, one of the travelers saw Leo again—as the revered head of the Order that sponsored the journey. Leo, who had been their servant, was the titular head of the Order, a great and noble leader. In The Servant as Leader, Greenleaf said:

...this story clearly says—the great leader is seen as servant first, and that simple fact is the key to his greatness. Leo was actually the leader all of the time, but he was servant first because that was what he was, deep down inside. Leadership was bestowed upon a man who was by nature a servant. It was something given, or assumed, that could be taken away. His servant nature was the real man, not bestowed, not assumed, and not to be taken away. He was servant first.

If there is a single characteristic of the servant-leader that stands out in Greenleaf's essay, it is the desire to serve. A walk through The Servant as Leader provides a fairly long list of additional characteristics that Greenleaf considered important. They include listening and understanding; acceptance and empathy; foresight; awareness and perception; persuasion; conceptualization; self-healing; and rebuilding community. Greenleaf describes servant-leaders as people who initiate action, are goal-oriented, are dreamers of great dreams, are good communicators, are able to withdraw and re-orient themselves, and are dependable, trusted, creative, intuitive, and situational.

Greenleaf described a philosophy, not a theory. However, based on the views of a number of scholars, the elements that are most unique to servant leadership compared with other theories are:

(2) the focus on serving followers for their own good, not just the good of the organization, and forming long-term relationships with followers, encouraging their growth and development so that over time they may reach their fullest potential;

(3) concern with the success of all stakeholders, broadly defined—employees, customers, business partners, communities, and society as a whole—including those who are the least privileged; and

(4) self-reflection, as a counter to the leader's hubris.